NFT Listening Party For Musicians: How To Plan A Successful Digital Listening Experience 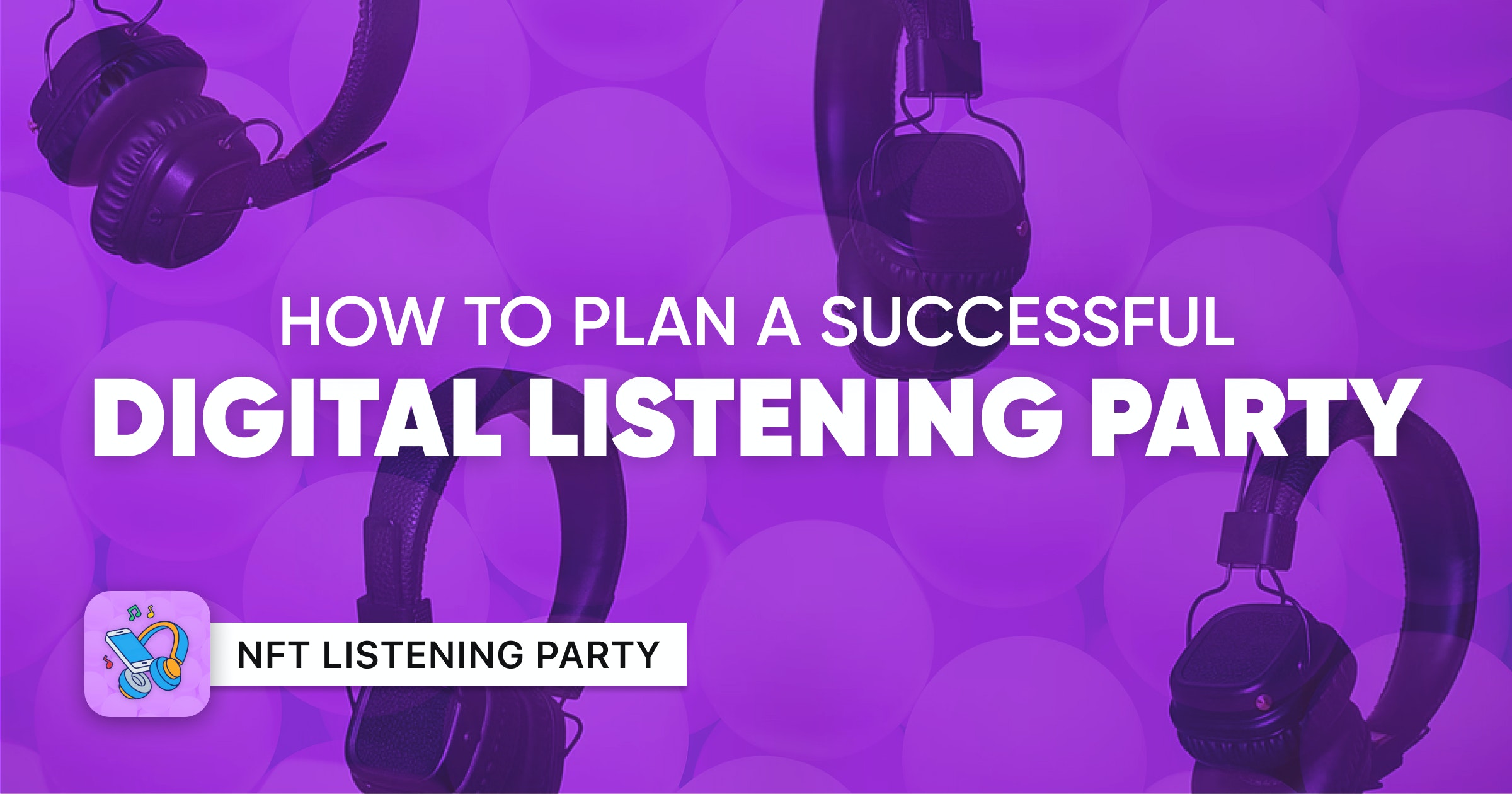 Launching a new song or album may seem like easy work once you’ve finished tracking and mixing your latest beats. The real work, however, has just begun. Now, you have to develop a plan to promote your new music, which, of course, includes an album listening party.

Planning an industry listening party, whether in-person or virtual, takes a lot of work. Often, you may not realize how much until you get started. It’s important to create a unique moment within the music space where your fans can connect with you and your music on a different level. At the same time, a music listening party is an excellent opportunity to showcase your music and build hype for an upcoming album launch, which is why Koji developed the NFT Listening Party app for your Link in Bio. It can help you create a launch party for your followers in minutes.

Below, we’ll explain some steps you should take when planning your virtual industry party and how the NFT Listening Party app can help streamline the process.

Planning And Promoting Your Industry Party

It can be hard to plan and promote an industry party if you don’t know where to start. There are a few things you should nail down step-by-step when creating a virtual listening party for fans.

Decide On A Release Date

While this may seem like a no-brainer, choosing a date for your new song or album release can be a feat in itself. The key is to give yourself enough time to plan everything in advance.

Industry experts recommend leaving three to eight months to plan a traditional music release once you finish recording and have a physical copy of your album in hand. Why? Well, it’s because creating a publicity campaign takes months to plan and execute. And if you don’t have a record label, you’ll spend most of this time pitching to record labels or industry professionals.

Once you set a date for your album release, you can jump head-first into planning your launch party. The NFT Listening Party app for your Link In Bio (more on this below) lets you set a start and end date for your virtual party, giving your fans a chance to listen to your music before it’s officially released.

There are two significant benefits of creating a launch party for your new song or album: connecting with your dedicated fan base and recovering some of the costs spent creating your new music. After deciding your album’s launch date and party timeframe, the next step is to figure out how to monetize your music.

In the NFT Listening Party app for your Link In Bio, you can create an NFT gate that allows your listeners to unlock your audio by owning an NFT in your collection. You can choose between Ethereum, Polygon, and Rinkeby for the blockchain and select your contract type. The app also allows you to customize a thank you note to fans that will be displayed once they’ve finished listening to your new album.

Create A Buzz Among Your Fans

This one is pretty straightforward. Once the details are set, you’ll want to create some noise around your virtual release party! You can create a contest around the release party, tease the album’s art, or even release a few short videos of some of the songs on your album.

At this point in the game, it’s all about having fun and celebrating the success of your new song or album. Take advantage of your social media channels and show your fans what they’re missing by not signing up.

Using The NFT Listening Party App For Your Link-In Bio

If you’re looking for a hassle-free way to create a listening party, you came to the right place. The NFT Listening Party app was designed to help musicians get their virtual launch party up and running quickly, making it easy to monetize their latest music.

Musicians can go to the Koji App Store to add the NFT Listening Party app to their Koji profiles.

Configuring the app is relatively simple, and requires an NFT and some music to set up. After filling out a form with your media, text, and NFT info, you can upload all of the audio tracks that you’d like to showcase to your audience. You can add a single track or many. All audio tracks are displayed in a sleek, distraction-free audio player that lets your audience listen to your audio tracks one time.

The app can be used in many ways, from dropping a new album to creating a new mixed playlist. We’re excited to see how you use it for your latest beats.

We’d love to hear your feedback, ideas, feature requests, and bugs. Twitter is the easiest place to get in touch – we’re @madewithkoji, and we can’t wait to see what you do with this app.

Link In Bio Apps For Musicians: Getting Started

How To Promote Your Music On TikTok

Boost It For Musicians

How To Book Your First Show In 5 Simple Steps